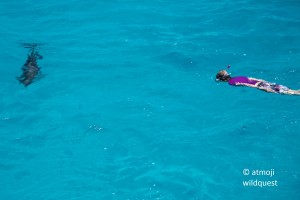 Travelling to the Red Sea and the Atlantic Ocean to meet dolphins in the wild has been life-changing for me. During each trip, I asked the dolphins whether they would share their healing energy or frequencies, through the medium of the water, with me, for myself and for all the people who do not have the opportunity to swim with them in the open sea. The journeys and the gifts from the dolphins have led to my dolphin connection. When you feel connected with the energy of the dolphin, you automatically enter a world full of love, joy, freedom, play, flow, connection, unity.

The first trip was to Sha’ab Sataya (Dolphin Reef) in the Red Sea. See the satellite photos from Google below. I knew what I was going to do there; my intentions were clear in advance, and I had prepared myself well. I took thirteen labelled bottles (numbered 1-13) along with me to Egypt, to capture the healing energy of the Spinner Dolphins (long-beaked dolphins) that regularly visit the reef to rest. No idea how, or what to do, but with a kind of faith I stepped onto a dingy charter boat. After half a day of sailing, the boat anchored behind the reef. We unfortunately did not often see dolphins while snorkelling by the reef. A bit anxious, I ‘just’ asked telepathically what I should do. There was a brief moment of connection, and the answer was rather short: ‘wait for the dolphins’. A few times we

found ourselves in the middle of a  group of dolphins, but those disappeared very quickly. On the next-to-last day of our stay, we went searching for the dolphins behind the reef in a rubber boat. I had my 13 bottles, filled with spring water, with me. While still on the way, I already felt a strong connection with a very powerful loving energy. The deep emotion kept bringing tears to my eyes. A little while later, we saw the dorsal fins of dolphins everywhere around us! Someone remarked that the dolphins were swimming in a large circle around the boat. I suddenly had an intense impulse to get into the water with the bottles. As soon as my toe touched the water, I literally felt contact with a very powerful energy field. Overwhelmed by this energy, I burst into tears and entrusted the bottles to the sea. I let out an enormous cry, and a feeling came over me of ‘IT’ is done! Then I kept an eye on the bottles, which were peacefully bobbing in the water. After a time, it was enough, and we returned to the boat with 13 bottles full of dolphin energy from that energy field. Back home in the Netherlands, a number of people tested the bottles.

Mariet van Buuren from Instituut voor E.E.N.® wrote the descriptions with great wisdom. Those were so beautiful that I could not believe that they fit with the effects that I noticed from the bottles. Only after a year of testing could I say that her descriptions do indeed fit the agents. The Asberg Dolfijn Energetica® were born! In the Netherlands, it became apparent that the first series of 13 bottles with energy agents, named Series 1, would have a successor. Together with Karin Lunow and Nico Scholten, Series 2 was prepared. After less than a year, the time was ripe for Series 3, which has been beautifully received in Karin Lunow’s practice. See Descriptions for further explanation of the effects of the different series of Asberg Dolfijn Energetica®. The agents have been distributed since 2005 via this website. There are also regular workshops organized for therapists, in collaboration with Instituut voor E.E.N.®, in order for them to become familiar with the use of the dolphin energies and to use these agents in their practices.

In 2012, it was finally time again for a trip to the Red Sea, although the impetus for it was very strange. A bit more about that later.

In the year 2010, my wife Heleen passed away after a difficult battle with cancer. A difficult period in the lives of our three children and for myself. Despite the pain, it quickly became clear that there is only one way to continue to live, and that is to fully participate in life and to look for that which can bring enjoyment. In my case, that was simply ‘playing’. When I can play (in all kinds 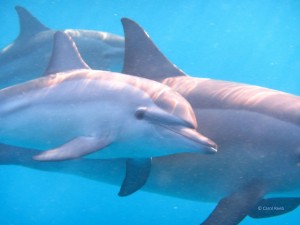 of ways), then I am happy and I can enjoy life. On a beautiful day in March 2012, I looked on the internet for a site for dolphin travel. Yes! The itch began again; it was the urge to go back to the Red Sea. Then I started to wonder what the purpose of this trip would be. It soon occurred to me that 5 energy agents for children would be added. Sensitive people in my environment pointed out to me that Heleen could be the reason why I had to travel to the Red Sea now. My wife was a nursery school teacher her whole working life and was crazy about children, so why not Kinder Dolfijn Energetica for children? With my youngest son David along, I travelled to the Red Sea. We had a great deal of fun and saw many dolphins practically every day; we were often in the water 5-6 hours per day! Interaction with the dolphins was relaxed, and we enjoyed ourselves very much. We danced with dolphins! During the trip, it became a regular habit to sit on the aft deck with our guide, Godfried Kleinsmann from  Dolfijn-Reizen, and to evaluate the day together, to meditate and to be together. Sometimes there were dolphin songs played on the iPod with a speaker. One afternoon we were sitting there and Godfried played the dolphin song. Only now, for me, the song was sung by Heleen. Crystal clear – only her voice was present, and she sang the song for me, and after it was over, she was immediately gone again. Such a moving message was the confirmation for me that the Kinder Dolfijn Energetica were supposed to be added.

On a beautiful afternoon, it was time for the ceremony with the bottles. In this case, that meant taking along the bottles numbered 1 through 5 in a net with me into the Red Sea, and then just waiting to see what the dolphins planned to do. Entirely unexpectedly, a large pod (group) of mothers with children came out of nowhere and very quietly started swimming amongst us. The moment was serene and beautiful. It was clear that at the moment the Kinder Dolfijn Energetica were received from the children among the dolphins. The Kinder Dolfijn Energetica were distributed starting in Spring 2013. Mariet van Buuren again provided the simple descriptions, understandable for parents and children.

On the website of Mary Getten, an animal translator from the U.S.A., I read that she had interviewed orcas and had bundled the interviews into a book. I ordered that book (only available in English and through her website) and read it with interest. A beautiful book, in which many telepathic interviews with multiple orcas are described. Anyone who has read this book will only be able to consider orcas, dolphins or whales as powerful, loving and spiritual beings, a kind of brothers and sisters of humans, but much wiser. Mary also gives courses in communication with dolphins on Bimini (the Bahamas). It was a very appealing idea to go take such a course, given my relationship with the dolphins. Together with my girlfriend Mieke, I booked the trip in the summer of 2015. 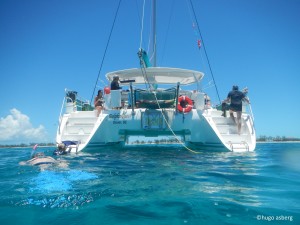 We stayed in the WildQuest resort, an excellent hospitality organization specialized in swimming with dolphins in the open sea. They have a sailing catamaran with which we went to sea daily.

On the island, there was daily meditation under Mary’s leadership, yoga in the mornings, and in the evenings, courses to free ourselves as much as possible of everyday worries weighing on the heart and the mind. We thus learned to align ourselves better with the energy of the dolphins. We also learned to tune into the deva of the dolphins. When you make contact with the dolphins in general, then you are actually making contact with an ‘overarching being’: the deva. (The word deva refers in Sanskrit to all beings that live on a higher plane of existence than humans1). Instinctively, the deva is a large being with whom you can communicate very well. Of course we also went to sea each day with the sailing catamaran. We could regularly take short swims with the dolphins; they were often travelling and came to say hello to us along the way! I will never forget a meeting with one mother dolphin with her young. The young dolphin invited me to come swimming for a while. Great example of a dolphin connection!

After the week with Mary, to our surprise we were able to book another week at WildQuest! It would become a special week, with Louis Corleto and Lydie Ometto from The Center of Life Expression. They offered a course on ‘How to re-invent yourself’. It was an unplanned training week, and we worked intensively on ‘inventing ourselves again’. Of course we were also out to sea daily and went swimming with dolphins. In the evenings, courses, meditation, exercises and making plans for where we wanted to be in 5 years with our new re-invented selves. Over the course of the week, the contact with the dolphins, the deva and Mother Earth became tangible to the bottom of my soul during a 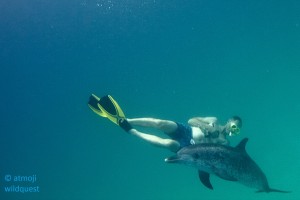 meditation. I could see the dolphins as teachers; the dolphin connection was so clearly there. If you want, as it does not come automatically, you can connect yourself with the energy/spirit of the dolphins. They ensure that you can make the connection between heaven and earth more easily. Result: you will feel happier, more free, more sensitive and more loving. You experience the dolphin connection. You can play again! During this second week, I also went into the water a number of times with the 8 bottles. Quite delightful, but no specific events that gave me the feeling that ‘something’ happened there. What to do? When I asked the deva in the course of the week when the moment would be for receiving the energies, the answer was short and clear: ‘It’s done’. So there you have it! And thus the Kinder Dolfijn Energetica series was complete! Mariet again provided the descriptions. The sets are ready for distribution starting in March 2016.